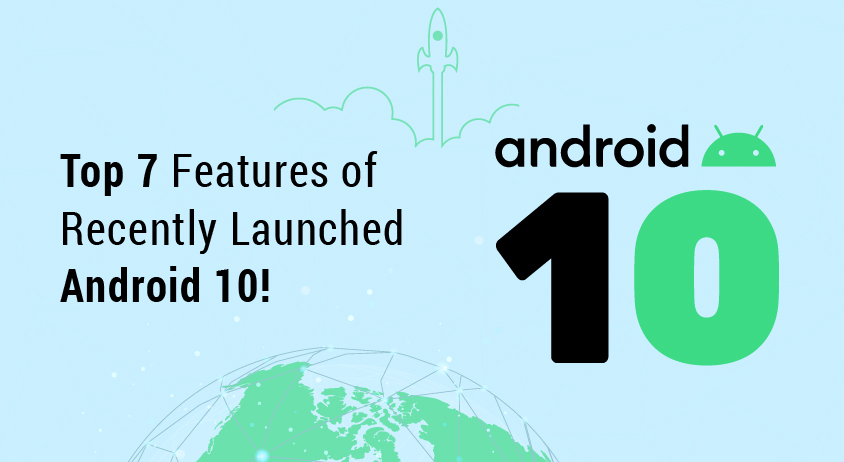 The search engine giant Google has successfully launched the much-awaited Android 10. It was made available on Tuesday, September 3, 2019, and the upgrade is free to download. It is installable on Google Pixel handsets, including the Pixel 3, Pixel 3 XL, Pixel 3a, and Pixel 3a XL. The dessert name Android Q was abandoned in favor of numbers, and thereby, it was rebranded officially as Android 10 before the release. Many industry experts and Android app developers consider this launch as a significant branding makeover.

The good news is that Android 10 is coming loaded with functionalities. Here are the top 7 features of recently launched Android 10 mobile operating system that everyday users and Android app developers need to know:

The Smart Reply feature suggests replies for messages received in various apps. It also recommends users actions based on the messages that they have received.

Even in noisy surroundings, Sound Amplifier feature enables users to adjust the sound settings of their smartphones. According to the Android website, a user will be able to boost the sound, filter background noise, and fine-tune the audio of their smartphone to get the best listening experience.

Using smooth and straightforward gestures, an Android user can go backward and forwards, switch between apps.

The Live caption feature automatically captions videos, audio messages, and podcasts. This feature is coming packed in Pixel smartphones that are releasing this fall.

Family Link feature is installed on all the devices running Android 9 or 10. This feature helps parents to use tools to set daily screen time limits, device bedtime, and more for their kids. The time spent on the devices by kids can be tracked.

Typically, Android updates to smartphones take weeks or months to roll out. Of course, smartphones become victims of these security flaws. According to the Android website, “With Google Play system updates, important Security and Privacy fixes can now be sent directly to your phone from Google Play, just the same way all your other apps update. So you get these fixes as soon as they are available,” Android website says – Google has fixed this security flaw in the Android 10 update. This is appreciated by Android development teams and users across the world.

Over the top, it comes packed with 65 new emojis, including 56 gender-inclusive emojis. It supports direct audio streaming to hearing aid devices. For more details and Android development in and around Atlanta, feel free to get in touch with us!