Apple Watch – What to expect on April 24th 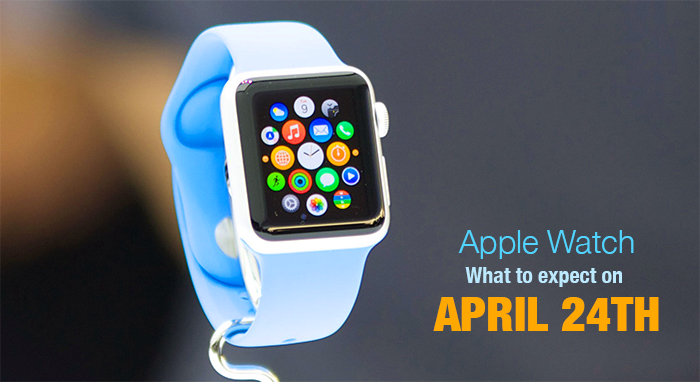 It has been a perfect countdown for the big day – March 9th, 2015; yet the ultimate big day is the day when the Apple Watch adorns the wrists of its customers. And that day is April 24th, 2015. The real buzz will begin when the consumer wear them and voice their opinions, that is when the Apple Smartwatch will be put to the real test.

As if the iPhone 6 buzz wasn’t enough, Apple is again in the limelight like never before with,Tim Cook putting it as – “Apple Watch is the most personal device we have ever created. It’s not just with you, it’s on you.”
There is more – the 12-inch laptop MacBook, with MacBook Air and MacBook Pro are also in the pipeline. More surprises on the horizon.

But the entire spotlight is on the most anticipated and highly expected Apple Watch. Let’s take a quick look at the most impactful takeaways from the Apple event.

Apple finally managed to pull it off! Yes, after the big release of iPad in 2010 (of the new product category).
The Apple Watch Is Unveiled In 3 Models -The Sport, the Apple Watch and the Apple Watch Edition. Expectedly, the Apple Watch Edition is definitely on the luxurious segment, with a starting price at a mega $10,000 owing to the 18-karat gold luxury it comes with. If one cannot afford the luxury watch, the stainless steel Apple Watch comes in two sizes of 38mm and 42mm priced at $549 and $599 respectively; also be informed that it could get higher until about $1,099 depending on the band. The Apple Sport is the cheapest priced of the variants with $349 for 38mm and $399 for 42mm that are made of anodized aluminum.

The pricing is purely based on the hardware capacities, while the software capabilities remain uniform throughout. You will pay for the material the watch is made of, not the inner-workings of the watch.

The pre-bookings for the Apple Watch started March 10th. The luxury version (Apple Watch Edition) will be made available as a ‘limited select retail stores’.

How About The Battery Life?

Yes, that’s exactly the obvious question as a smartwatch is nothing without a great battery. Though it’s not been a revolutionary change in these quarters, Apple claims that the Watch will have up to an 18-hour battery life. The Watch comes with cables that auto-magnetically attach to the back, which is pretty nifty.

In addition to the high time keeping and high-resolution screen, the customization is fun with the users having 10 watch faces that can be customized to different second time hand. There’s even a Disney option, with Mickey Mouse swinging his hips counting the seconds.

How about The Screen?

UI is one of the areas that was closely watched. This is probably one area where Apple Watch could possibly stand in achieving innovation and uniqueness.

While there is obviously no room for more than a single finger interaction with the device, the display has been more sensitive with ‘simple tap and a force touch’. Scrolling and zooming has been moved to the dial on the side and the Siri assistance has been retained. The ability to make Apple Pay transactions via wrist is noteworthy.

Want to feel like James Bond? You can now when you make and receive calls on the Watch. In the same fashion, also get your messages, emails and notifications on your wrist without having to carry your iPhone in hand all the time.

Got an iPhone that’s a 5 or 6? Then you got the best buddy for the Apple Watch. It is definitely a perfect up-sell tactic. If purchase an Apple Watch and don’t own an iPhone, then we are sorry, you cannot enjoy the Watch to its fullest. The iPhone and the Watch go hand-in-hand.

The Apple Watch is fueled by the iPhone and the same with the apps, as well. But expect some native apps later this year.

With the Apple having given access to its WatchKit tools last November, the various potential possibilities with which they can be used were suggested, such as booking taxis, flight check-ins with Passbook, using Instagram and much more.

With a whole lot of possibilities, innovation is definitely a basic criterion to be on the Apple app bandwagon. Got app ideas for the iPhone? Then we have just the right expertise for you.